Regarding  the current role of nurses in combatting antimicrobial resistance (AMR), ESNO regards that thus far there had been a lack of involvement of specialist nurses on this issue and that there is great potential to increase involvement in the areas of antimicrobial stewardship, surveillance of the incidence of drug-resistant infections and education of patients on this topic. ESNO aims to raise awareness and educate nurses on this topic; equipping nurses to tackle AMR is now a top priority for the organisation. In addition, this initiative also acts as an extension of a request from the European Commission to ESNO to play an active role on AMR and Vaccination

On the vaccination, in recent years, ESNO has observed a significant increase in infectious diseases that could be prevented by vaccination. This increase was also accompanied by serious outbreaks, resulting in the deaths of people young and old, including healthy young people.
Not only has this come at great human cost, but it has had a paralysing effect on health systems. We can see a particularly strong impact from diseases such as influenza, rubella and measles, for example.

This has prompted ESNO to take a position on this problem by promoting vaccination with an emphasis on information and education. Far too many misconceptions or misleading information is circulated, even among by health professionals, including nurses and in the medical profession. We have seen complete hospital wards shut down and operations postponed, as well as absenteeism in schools and workplaces with a knock-on impact on families and wider society. For this reason ESNO is in the process of creating a multi-lingual Information and Education Guide for Nurses, following the recommendations and call for action by the European Commission the European Centre for Disease Prevention and Control (ECDC)  and  initiatives of industry, Vaccines Today, and the International Council of Nurses (ICN).

During the ESNO General assembly, the ESNO members decided to adopt AMR as a key issue to address accompanied by Vaccination. Both of these topics are interconnected. For this reason, ESNO is making an Information and Communication Guide for Nurses which will be split into four modules: 1) Microbes, 2) Antibiotics and Vaccines, 3) AMR and 4) Vaccination. This Guide will be created in collaboration with a number of ESNO members along with European and global health institutes such as the International Council of Nurses (ICN), World Health Organisation (WHO), European Centre for Disease Prevention and Control (ECDC), Joint Action on Antimicrobial Resistance and Healthcare-Associated Infections (JAMRAI), PA International and European health NGO’s. The finalisation of this Guide is scheduled for the end of April 2019 during European Vaccination Awarness week and will be accompanied by activities on social media.

Publications on AMR and Nurses

Popular posts from this blog

June 11, 2020
Join  @esno_web   photographers pool.  Share your  real life nurse  photos at  info@esno.org    # Nursing   #Caring4Nurses   #Nurses2020 #pictures ESNO is depending on nurse images for publications, newsletter, website, magazines and so on. The easy way is to download stock-photos' but they are not nurses, they are actors and does not reflect the image of nurses. We are interested for images related to the real nursing world based on your nursing work, images from the nursing world by nurses. This can be clinic, technical, administration research, by nurse images but also objects and instruments.  On the structure, we have no real big wishes but have some guidelines. If you are wishing to engage, we send you a link where you can upload your pictures Good resolution image but doesn’t need to be HD but it shouldn’t be a pixelated image so that it looks good on social media Image type can be: JPEG , PNG .AI, .EPS or .SVG Please include words on subject
Read more

PRESS RELEASE FOR IMMEDIATE RELEASE Date:                     19-02-2020 Place:                    Brussels, Belgium Subject:               Coronavirus outbreak “Current and future virus infections outbreaks, European professional competencies under revision” The current situation of the Coronavirus outbreak is creating a lot of pressure, including burnout, on all healthcare institutions especially on nurses who are the front liners, and those who are working in countries that are affected by the new COVID-19 virus. ESNO comments the ICN letter to colleague nurses in China [1] . Since it is a new Coronavirus, we do not yet know exactly its mode of transmission. However from the preliminary knowledge that we have, it seems to follow the same routes as the previous SARS virus way back in 2002 i.e via respiratory droplets when a person coughs and sneezes and also through the environment when people touch a contaminated surface and then touch their face (eyes and mouth)
Read more 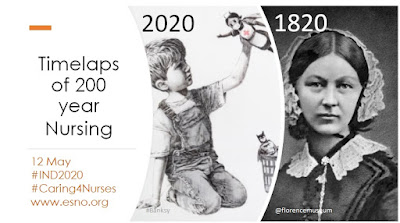